“This really isn’t somethin’ we can afford to cut corners on … Killer Joe’s a professional, and he’ll do this right.”
Hollywood star Orlando Bloom (Legolas in The Lord of the Rings trilogy and The Hobbit trilogy, Will Turner in the Pirates of the Caribbean series) plays a cop who moonlights as a killer-for-hire in the West End production of multi award-winning Tracy Letts’ violent and darkly comic, Killer Joe.

The Smith family hatch a plan to murder their estranged matriarch for her insurance money. They hire Killer Joe Cooper, a police detective and part-time contract killer, to do the job. But once he enters their trailer home, he comes face to face with the innocent daughter and their simple plan spirals out of control…

Killer Joe asks where the moral line is drawn in the fight for survival.

Reviews
★★★★★ – ‘A sharper, tenser, more violently entertaining night in the theatre you will not find’- Libby Purves 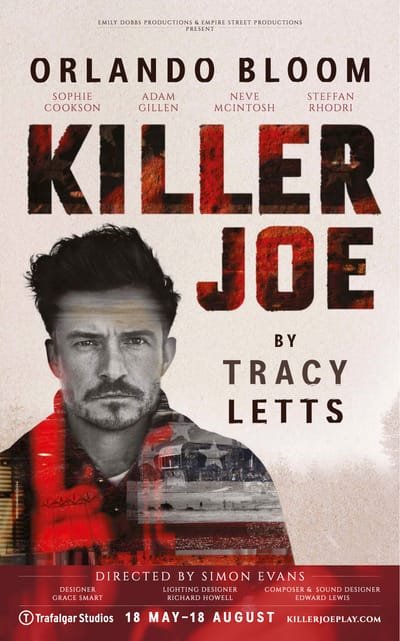