The Whale by Samuel D.Hunter

In a small town on the outskirts of Mormon Country, Idaho, Charlie, a reclusive online writing instructor, lives marooned on a couch. Weighing in at six hundred pounds, he is slowly eating himself to death.

But redemption may be within reach as he tries to reconnect with his sharp-tongued daughter, estranged from him for 15 years. A conveyor belt of visitors – welcome and otherwise – move through his living room, from his friend and nurse Liz, the sister of his deceased boyfriend, to Elder Thomas, a hopeful young missionary and Mary, his ex-wife. Can any of them help him to see a future?

The Whale, an Off Broadway smash hit, is the huge-hearted and fiercely funny story of a father’s final chance at salvation, and of finding hope and beauty in the most unexpected places.


Reviews:
★★★★★ “Shuler Hensley is SUPERB … In an exceptionally strong cast, Rosie Sheehy is a knockout … Sheehy is one of the finds of the year” Observer

★★★★ “A little beauty of a drama…Laurence Boswell’s sharp, sympathetic production. Shuler Hensley is OUTSTANDING” The Times

★★★★★ “It’s the depths of passion in the text and masterclass in performance that holds you spellbound … it knocked the stuffing out of me. UNMISSABLE” WhatsOnStage 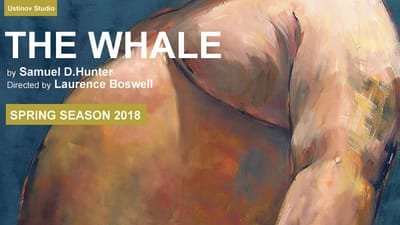